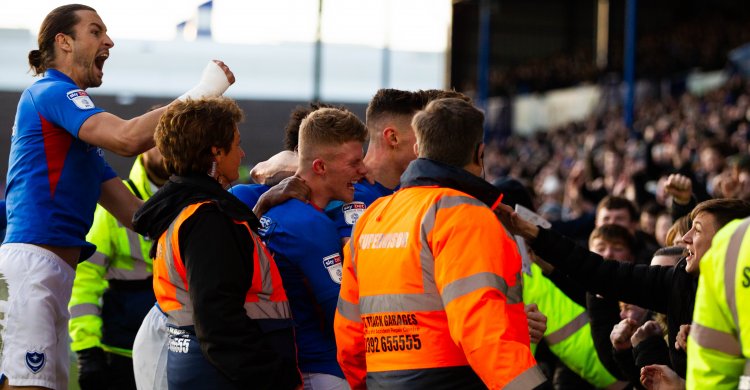 “If you have the privilege to be a role model, then you should try and use that as best as you can to make a positive impact”, is how Christian analysed the mutual adoration he has with the Portsmouth fans, even 3 months after his departure from the club.

A couple of weeks ago, I got the absolute pleasure to have a chat with undoubtedly one of Pompey’s most respected players of the past few seasons. Christian departed Fratton Park at the end of the 2019/20 season to join Belgian side Union St Gilloise. After 5 seasons in PO4, a League Two title win in 2017 and the Checkatrade Trophy in 2019 “a new challenge” and “getting out of the comfort zone” were the two main drivers behind the move to Belgium, explains the centre-half.

“When I moved here, the goal was to be playing in the Championship. There were obviously some things we set out to do and fell at the last hurdle of the goal.”

Christian Burgess always stood out amongst the team as a player who got busy not only on the field, but off the field as well. During our chat, I asked Burgey the following:

What motivated you to get behind the charity projects that you did, and why do you think it is important to you and for other footballers to get involved with community work in their cities?

“Being a footballer is a very privileged position to be in

So many young children want to become footballers, you get held up as someone to look up to, and a role model

If you have the privilege to be a role model, then you should try and use that as best as you can to make a positive impact

It should never be a chore to get out and involve yourself in the community especially as Portsmouth is such a community based club with a family feel – it makes it easier to fit in and go out and do some good. Feel welcome and at home.

When fans have the adoration for the club that they do, your job is to work for yourself, but also for the club and for the fans, and you owe it to them to do as much for that club as you can. The fans are the blood of the club and that’s who pays the wages.

Portsmouth’s fanbase is so special, it’s only right to try and immerse yourself in that. Also from a selfish perspective, it feels great to get involved when kids ask you questions, and you can give them advice and pass on some wisdom, it’s very satisfying.

Mental health is, and should be, a key topic in every industry. In the last few years, the sports industry has put a lot more focus on the topic of mental health, with initiatives such as the Mind campaign in the EFL. I asked Christian to give me his take on some of the issues surrounding negative fan engagement, negative media narratives, and ultimately, mental health in sports.

Being a professional footballer comes with perks, but being in the limelight of public criticism, especially in the current state of social media and the ease of portraying opinions online, how do you prevent negative comments from fans from damaging your confidence?

“Specifically after a bad performance or after a game where there could have been some controversial points, I would tend not to go on social media and avoid it, I just wouldn’t read my mentions, and I don’t follow journalists and news articles on social media anyway, so I would just stay clear.

You have to decide whose opinion you value in terms of your performance and games, and those usually aren’t people who are commenting on social media posts, if we’re being honest. I would look at it, and I know that I don’t value their opinion.

There’s kids on social media, with little life experience, and if you take those comments seriously, then you’ve not got much hope as there’s not even real names and faces on some accounts, it just shows how much of it is fake.

I would imagine that not looking at your social media after a bad performance takes a lot of willpower?

“I would probably disagree, because you know what is going to be there, it’s almost easier to just turn a blind eye, I don’t even want to go through it because I know it will be negative, throw your phone away, put on a film, have a glass of red or a beer and ignore it for the night.

I remember, there’s one time that stands out, where I knew it was going off and I saw messages of support from some fans and I thought you know what, I’m not even going to bother looking on Twitter for the weekend.

What do you think needs to be done in the sports industry in order to educate people? What needs to be done for fans to realise that football players are human too, with families and lives of their own outside of the pitch?

“Family – it’s interesting you mentioned that, often it affects the families more than the athlete. As a footballer, we understand and are used to it, but when a family member sees these comments which can be harsh, it can be difficult for them. It has a bigger effect than just the player.

More people need to talk about their experiences, we see it often where people share their stories, recently on mental health day, coming out and talking about stories of abuse in their past, which takes a lot of courage. Keeping the conversations going is what will educate people.

I’ve always wondered, when I saw bad things on social media, should your account be verified? It’s always been strange to me that you can come on and say what you want anonymously, I’ve often wondered what it would be like if everybody’s account was verified, and everybody was held accountable for what they say, but of course I understand there are issues with safeguarding and privacy, and the right to remain anonymous online, so this will probably never happen.

Let’s be honest, it wouldn’t be a chat in 2020 if I hadn’t asked Burgey what he did during lockdown, and how he’s kept his sanity during what can only be described as the most uncertain and bizarre months of our lives so far.

Finally, how did you cope during lockdown, both professionally with your training and routines, but also personally with not being able to see your family and loved ones?

“Professionally it was pretty easy. We had a routine, we had some fitness, some runs or cycles, but a whole day to do it in. So much time to do some exercise and factor it around different aspects of life. It was actually enjoyable to go for runs along the seafront as a change up from going to the training ground every day. I enjoyed that part of it.

The personal and social side, that was difficult. I was quite well prepared though, as I had lived alone in the north-east for a couple of years, I basically lived on my own since I started playing professional football and I’m used to it and I’m good at it. The thing that was difficult for me was, I like to go out to a coffee shop and just read my book, somewhere that’s busy and say hello to a few people you know, just those daily norms. The way I coped with it was, like you say, to just stay busy. I was lucky that I was able to do so and loved to do what I did over the pandemic and volunteer in the kitchen both for the community, as well as my own sanity. I spent time with some great people that I now call friends, and met wonderful people that do great work. From a purely selfish point of view, that was the best thing I did.

At the time of writing this, Union St Gilloise are currently sitting at the top of Belgian Division B with 6 wins out of 9, with Burgey starting all 9 games so far and keeping 4 clean-sheets. It is safe to say, he is settling in well.

A massive thank you to Christian for giving up some of his time to have a quick chat.